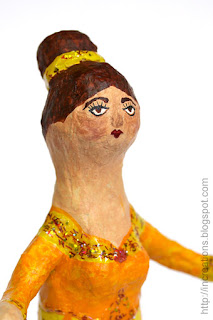 Inspired by amazing papier-mache dolls by Tatyana Dubinsky and her papier-mache tutorials, we made this doll. The fact that even my son enjoys playing with it speaks for itself :). For those who'd like to learn more — a detailed story with illustrations.

We used an adhesive bottle as a mould, it widens towards the bottom and seems ideal for making a dress. We poured some grit (or sand) into the bottle to make it more stable. 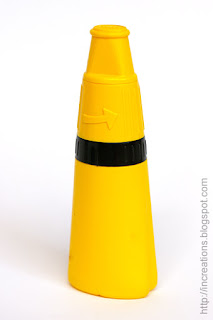 Twisted a wire for arms. We took advantage of the nozzle at the top end of the bottle to attach the wire. 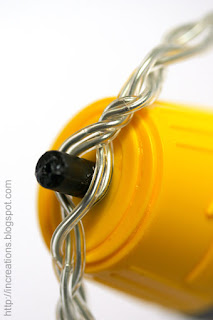 Put the cap back, it presses down the wire. The cap itself will be used as a base for a neck and head. 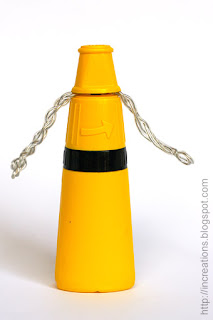 Crumpled three paper balls: one for the head and two smaller ones for the chest. Attached the balls to the body using masking-tape. Wrapped the body and arms in masking-tape, too. Masking-tape makes coating the mould with papier-mache layers easier. 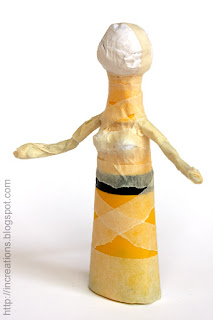 The first layer of papier-mache: pieces of a newspeper, dipped into a craft glue solution in water (approximately 1:3). Newspaper is excellent for paier-mache, since it absorbs glue and takes the shape of a mould very well. This stage is kids' favourite, they have fun tearing the paper and "bathing" in the glue. Let dry for one or two days. 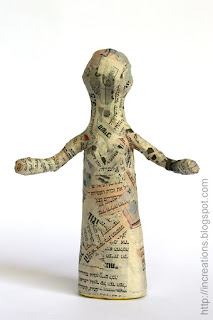 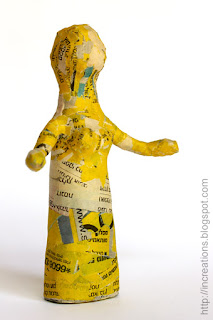 Layer by layer we built up 6 layers of papier-mache. Don't forget to dry up the design after every 2-3 layers — 1-2 days (or half a day in the sun). We used white newspaper margins for the last layer as the background for paint. You can skip it if you're going to use a putty. 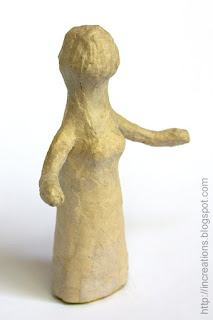 When the doll was almost ready, we decided to make her a high hairstyle. To do this we crumpled a paper ball, attached it to the head and applied two layers of papier-mache over it. 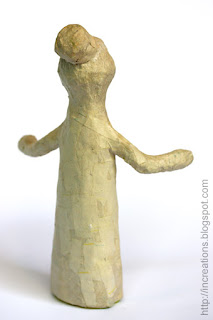 The kids decided on the colours and style of the dress, and I painted with watercolours and glitter glue, then coated with varnish. 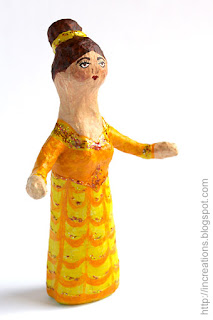 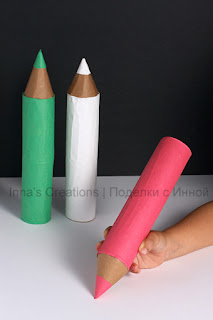