Showing posts from February, 2009
Show all

How to quill apples 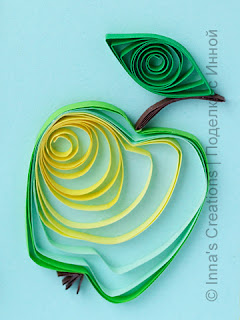 To quill a whole apple, glue together a few short strips of several tints, from light-yellow to dark-green. Roll this long strip, then let it unroll to desired size and glue its tip. You'll have to hold it for a while until the glue is dry. Shape the apple, then make the stem. Finally, make and attach a leaf — that's it. Now, let's make an apple cut in half. First, roll a short strip for a seed. Attach a longer strip and wind it around the seed, leaving some space between the strip and the seed, glue its tip. Add more loops in the same way, using strips of different length and color. Make the other half, then put the two halves together. Finally, wrap them in a single strip (like the red one in the picture). Happy quilling!
4 comments
Read more 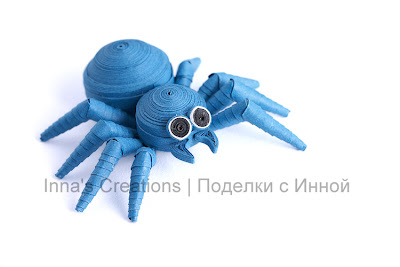 Don't be afraid of this little spider — he's made out of paper strips :) Maybe he's a relative of our pompom spider . More pictures:
5 comments
Read more 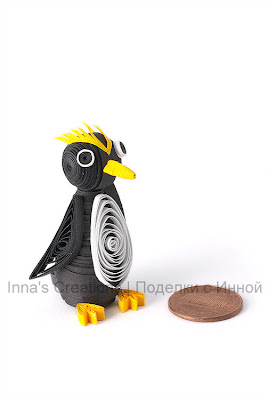 Along with the traditional, I also enjoy doing three-dimensional quilling very much. Here's my new 3D piece &mdash a penguin. Here's how I made it:
7 comments
Read more 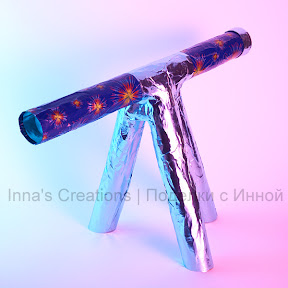 Recently my son got interested in astronomy :) Even though he's only almost four, he enjoys watching documentary movies on astronomy, knows the names of all the planets, what a solar eclipse is and much more... That's why we came up with the idea of making a toy telescope. Here's how you can do this:
11 comments
Read more 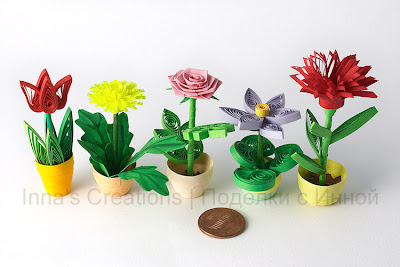 We love spending time in nature, especially these days, when Israel is blossoming: you can see cyclamens, dandelions, anemones, tulips, daisies, and many other flowers. I just couldn't help quilling flowers, and here they are, my tiny flower pots. The dandelion came first. It was made using the fringed flower technique .
29 comments
Read more 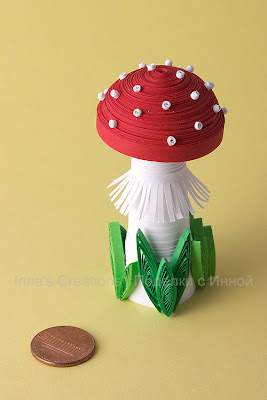 Stalk: For the stalk I cut 10 strips about 5 mm (3/16 inch) and 29.7 cm (or 11 inches) long, out of white A4/Letter printer paper. Then with the help of my children I joined these strips into a continuous long strip of about 3 m (10 feet), rolled it on a toothpick, glued the tip and pulled the toothpick out. Then I pressed into the center of the disk with my finger to form a cone shape, and coated it with glue inside. Cap: For the cap I used about 20 red strips 5 mm (3/16 inch) and 29.7 cm (or 11 inches), as I did for the stalk. We joined them into a long strip, rolled it and then I shaped the roll into a dome shape. Coated with glue inside the shape. Finishing: Then we attached the cap to the stalk and make a ring from a wide (1 cm or 1/2 inch) and short (5 cm or 2 inches) strip cut to make a fringe. I made a few quilled "eyes" for grass and let the kids attach them to the mushroom's stalk. The white dots were the most difficult part; I rolled them using very narro
4 comments
Read more 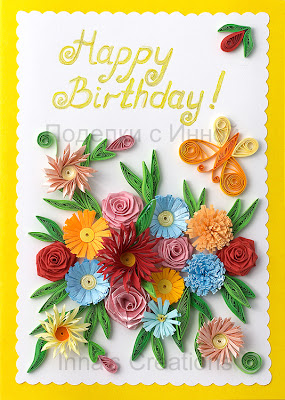 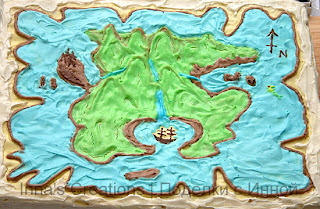 This cake is very easy to make, but kids will enjoy it no less than any other kids cake. You will need a square or rectangular cake, vanilla cream, cocoa powder, blue and green food coloring and an image of a map. Divide the cream into few cups and mix it with food colorings and cocoa, use the colors to draw the map. As you've probably guessed, we made a map of Neverland, the isle of Peter Pan. You can see Indian Camp, Mermaid Lagoon with a swimming mermaid, and the Captain Hook's ship. You can make your own map, or another "famous" one, like the map of Treasure Island. The idea of a map cake is from Quick & Easy Party Cakes for Kids: Over 130 Delicious Recipes .
Post a Comment
Read more

Handmade hamsa with flowers and ladybugs 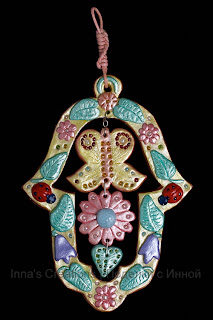 I had been planing to make a new hamsa for a long time, and eventually made this one for my mother-in-law's birthday. In my opinion, a hand-made hamsa makes a perfect gift. It's pretty easy to make a hamsa of this type, and I'm going to tell about this in detail.
Post a Comment
Read more

Another Valentine card with quilling 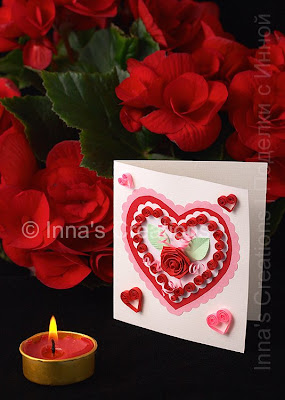 Another Valentine card, maybe the last this year :) An addition to the previously shown . Made with quilling on thick watercolour paper. Happy Valentine's day! and a version with smoke...
7 comments
Read more 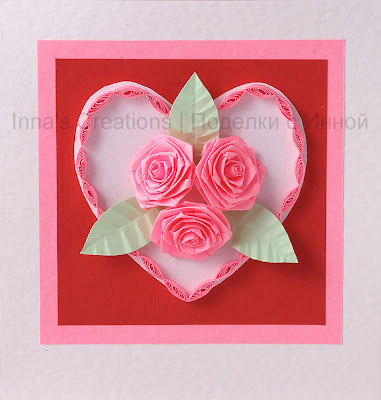 How to make double fringed flowers 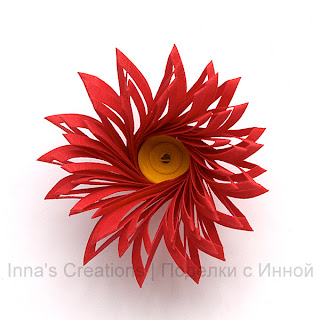 Another tutorial on quilled fringed flowers. This type is rather rear and I've never seen a detailed description of it. I already explained how to make simple fringed flowers earlier.
68 comments
Read more 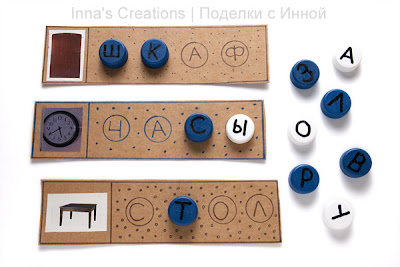 Recently, I stumbled upon this great DIY game for teaching letters and reading. For our game I used images from an old magazine instead of photos of family members. Besides an old magazine you will need some cardboard and bottle cups to make this game. Cut a rectangular cardboard card, glue a picture onto it and draw circles with the diameter of the bottle caps next to the picture (you can just trace the caps). Inside the circles write the name of the item shown in the picture. The same letters are also written on the bottle caps — now have your child pick the right caps and make up the word. I cut the cards out of cereals boxes. Letters that correspond to vowels are written on white caps, and those corresponding to consonants — on blue ones. For children who are already familiar with letters and starting to read, the circles on the cards can be left blank, and the word written underneath the image.
2 comments
Read more
More posts